HOW TO GROW pAPHIOPEDILUM ORCHIDS 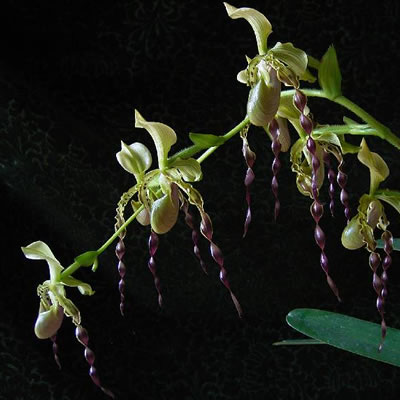 An introduction to paphiopedilum orchid culture...

The image is that of paphiopedilum parishii, a beautiful multi-floral flowering example of the genus.

Paphiopedilum species of which there are about 60 can be found growing naturally in the wild throughout India and other parts of Asia including Indonesia South China, Burma, The Philippines'.
They are commonly called Lady Slipper Orchids.

Image by courtesy of Jerzy Dziedzic and his Orchidarium page .

How to Grow Paphiopedilum Orchids

More than 90 species of Paphiopedilum (pronounced paf-ee-oh-ped-i-lum) are found in nature from the high hills of northern India to the lowlands of the Philippines and New Guinea.

They are magnificent orchids and both the species and the hybrids have always formed a major part of good collections.

They have a fascinating array of colours and forms and their ease of culture has attracted lifelong admirers.

All Paphiopedilum are characterised by both a cup-like lip called the pouch, which gives them the common name of lady slipper, and a prominent dorsal sepal.

The plants are mostly terrestrials, although some, like Paphiopedilum lowii may be found growing epiphytically, (on trees) or lithophytically, (on rocks) They are dwarf to moderate sized with leaves that are stiff, waxy or leathery and range from a glossy green to beautifully mottled. The leaves usually form a fan-shaped tuft.

An erect stem, bearing one or more flowers, arises from the centre of each new growth.

Some species e.g. P stonei and P rothschildianum, may produce up to six flowers on each stem. The flowers are from 2" to 5W' across in a variety and mixture of colours and may last perfectly on the plant for six weeks or more.

The major blooming season is from mid-autumn onwards although variations occur.

Paphiopedilum are divided into two cultural groups: the warm-growing, mottled-leaved types like the famous Paphiopedilum Maudiae (ideal for beginners), and the cool growing, plain-green leaved types. All types require reasonably cool nights, particularly in the spring when they will be setting their buds for the autumn flowering season. Although this need makes them difficult to manage in warm areas, their low light requirement makes it possible to keep them cool by shading. Hence, both mottled and green-leaved Paphiopedilum may be grown side-by-side but perhaps not to the same perfection as if their requirements were tailor-made.

Green-leaved types ideally require a minimum night temperature of approx. 55°F while the mottled- leaved types do better with a night temperature of 60-65T. Day temperatures should range between 70-80°F although short periods of higher temperatures will not injure the plant. The humidity should be moderate, between 50-60% during the day. Light Paphiopedilum enjoy medium light intensity, about 800-1000 foot candles throughout the year for optimal growth. Avoid direct sun, except in the early morning. In the house, move plants back from the window at the height of the midday sun or, ideally, grow them behind a shade curtain. Air Movement Moist air and vigorous air movement at a favourable temperature, is highly recommended to keep the leaves cool and to dry drops of water on the plants thereby reducing the chance of spreading disease. Hot or cold draughts cause bud-blast (the buds turn brown and die).

Paphiopedilums do not have pseudobulbs and so, like Phalaenopsis, they must have a regular and constant water supply. This entails keeping the growing compost moist but not wet, a technique that beginners will have to practice to get perfect. Water the plants early in the day so that the foliage will be dry before the temperatures drop at nightfall. Plants typically need to be watered every five to seven days but weather conditions may modify this need. The potting medium, the surrounding humidity and the weather all affect the rate at which plants dry and thus need water. For those growers using bark as a potting medium, it is essential not to let the plant dry out completely because bark becomes very difficult to re-wet. Water will channel through the dry medium without wetting the plant or the compost. If this happens submerge the whole pot in a pan of water until moistness and wettability have been restored.

Plants growing in bark need a high nitrogen fertiliser (30-10-20 or 30-10-10 ratio) at half the strength recommended on the pack. Fertilise greenhouse-grown plants three times in succession and the fourth time, flush through with pure water to leach out any mineral salts that have accumulated. For home or windowsill growing, alternate the fertiliser with a pure water flush. Plants grown in some of the more complicated mixes with leaf mold and peat should receive fertiliser at more reduced strength because the mix itself provides nutrition and extra nitrogen may cause souring of the compost.

Because most Paphiopedilums are terrestrial a medium that drains well but retains moisture is needed. Four parts fir bark to one part Perlite is excellent. Finely chopped fir bark (l/8th to 1/4 inch) is preferable to the medium or large chunks used for Cattleya and Cymbidium. Moisten the bark mix thoroughly before potting any type of orchid in it. Paphiopedilum can easily grow into specimen plants because, with good culture, they will produce growths freely and regularly. They are capable of producing flowers on rootless growths and in such cases particular care must be taken to ensure that large plants have good, supporting root systems. Repot Paphiopedilum before the growing medium decomposes and before the plant has outgrown its pot, or when it needs dividing (i.e. about once each year). The repotting procedures entails first, clipping off dead roots, then positioning the plant in the new container and finally filling in around the roots with the compost medium until it reaches slightly over the base of the plant. Do not bury the new plant growths as this will cause rotting. The base of each growth should be in contact with the growing medium to encourage new roots to form. Restrain watering to a minimum until evidence of new growth is apparent but do not neglect the humidity or the plants will dehydrate. Recently repotted Paphiopedilum should be placed in a shady area and moved gradually into the correct light conditions once new growth begins.