HOW TO GROW pHALAENOPSIS ORCHIDS 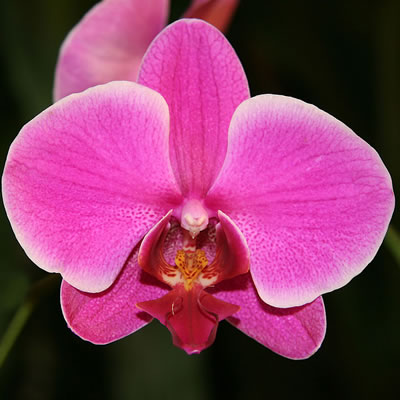 An introduction to phalaenopsis orchid culture...

Phalaenopsis come in many different sizes and colours striped spotted mottled blotched plain white or a combination, flower and plant size vary depending on the parentage.The leaves as fleshy and rounded, sometimes attractively mottled.

They make excellent house plants, but don't forget to make certain that the temperature at night stays above 58deg. f or the plant will suffer.

If you buy one from a supermarket or garden centre, beware of the oddly coloured varieties, ie. bright blue, they are injected with a die, next years bloom will probably be white with a yellow lip!!.

How to Grow Phalaenopsis Orchids

These orchids are the easiest and most rewarding of the family for the home grower as they produce arching spikes of ten or more flowers as often as three times a year, and which can flower for months.

In nature there are just under 50 wild species which are found from India eastwards through the Philippines and into Northern Australia. The name Phalaenopsis (pronounced fal-ee-nop-sis) is from the Greek and means moth-like.

The plants are shade-loving and grow on branches or on rocks where the air is warm and moist.

Phalaenopsis plants do not have pseudobulbs and the strength of the plant is in its large, leathery leaves and thick roots.
New leaves appear slowly and regularly over each other and are generally a deep green but occasionally can he attractively mottled.
The flowers appear on a spike from the stem between the leaves and, depending on the type, there may be anything from a single flower to over a hundred.

How to make a phalaenopsis flower again quickly.

When flowering has finished, or ideally has one or two flowers left, you can trim off the spike to around 1 inch from just above the first node on the main spike stem, that will be somewhere below where the first flower appeared, and is a little bump covered by a small leaflet,.
The plant may re spike and flower early from there, or if the spike has died fully and gone brown, trim off the flower spikes to within 1 inch from where they appeared out of the side of the plant, and look after it, it should re bloom on new spikes next year.

My Phalaenopsis has  small  plantlets growing on the flower spike !
Occasionally a flower bud will develop into a small plant with roots which can be cut off and potted up. These propagations may flower within a couple of years.

Many hundreds of hybrids have been bred, and the trade in Phalaenopsis is a huge pot-plant market because of the ease of cultivation as house plants.

Because of their wild origins, they like a minimum temperature of 20°C (68°F) although adult plants grow happily at 15"C (60"F) and actually flower better after a few weeks at this night temperature in autumn.
They will benefit from being over (but not in) a tray of pebbles that should be kept wet to boost the atmospheric humidity.

As they are shade plants, the moth orchids prefer dappled light (an east or west facing windowsill behind a net curtain is ideal). Too much bright light can burn the leaves and turn the plants yellowish while too little will result in plants with soft leaves that don't flower.

Watering and feeding. As they do not have storage pseudobulbs, their compost should he kept evenly moist using tepid rainwater, or reasonably pure tap water if you are lucky enough to have it. Do not let it dry out.
Avoid using cold water and don't allow water to remain in the crown of the plants for more than a couple of hours as it can induce rotting. Give a quarter strength fertiliser once a month.

Clear pots are ideal for these plants, the roots seem to benefit from the light, and you can also see any root problem developing before its to late. Use a coarse bark mixture with added charcoal, perlite (and sphagnum moss, or horticultural sponge, if in quick drying conditions). The roots often grow outside the pot, but this is quite natural and indicates that you are doing things right!
Repot after flowering. Don't over pot; wash the old compost from the roots before working the new compost gently and firmly around the roots.