THE STORY OF ORCHIDS

orchids have been around for maybe 100 million years ! 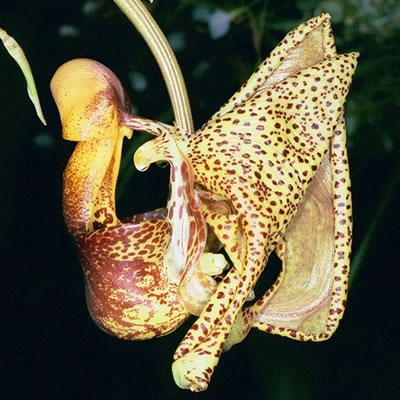 The story of orchids...

This epiphytic orchid can be found in Trinidad and South America.

The extremely large flower attracts the attention of the euglossine bee the male of which attempts to cover himself with a cocktail of the perfume of many coryanthes flowers, all of which have a slightly different scent, apparently to make himself more attractive to potential mates.
The clever way the orchid uses its innocent pollinator is fascinating:

National Geographic have a wonderful YouTube video which we recommend you watch........

An Orchid’s Trap | Wings of Life

What will eventually inherit the earth ?

some think the insects; well pehaps.....

Around 120 million years ago, when the dinosaurs ruled the land, much of the world was covered by primordial forest, and plant life was rapidly becoming diverse, flowering plants were evolving and one of the first of these was the orchid.

As the world underwent many changes species of both plant and animal life died out or were replaced, but the orchid family expanded, populating every corner of the world except Antarctica, living on trees, rocks, in the ground or under it, tropical rainforest or lush grassland, high mountain or bog, they thrived; nothing seems capable of upsetting their evolutionary process, indeed it is generally accepted that in the world today, there are over 35,000 different species of orchid in existence.

Many myths abound concerning them, the most common of which is that they are parasitical plants, this is not so, orchids grow on trees - true, but they do not feed from them, they use the host merely as somewhere to be.

The above facts must make them one of the most successful and adaptable family of plants, (which probably explains their long family history) what they lack in internal resources, they will try to obtain elsewhere, some orchids which prefer a more acidic condition, will encourage ants to live on them, even in some instances creating suitable chambers for their guests to live in, and in addition to warding off their enemies, the ants increase the acidity on the plant through their own use of formic acid as a defence system.

Orchids have known all about the birds and bees far longer than we have, and use that knowledge to good advantage.

When it comes to reproduction orchids are extremely versatile, but individually selective and have adapted themselves to use a variety of pollinators, with or without their consent.

Where many insects are concerned, the plant attracts them either by smell or mimicry, or in some instances even a little stealth.

or as more commonly known the bee orchid is trying to mimic in order to attract a pollinator.

The smell factor is an obvious attraction to a pollinator, but mimicry? well the flowers of many orchids are so designed to look like either an aggressor of the pollinator or it sexual partner.

In the case of the Bee orchids illustrated, male bees are attracted to the plants because the flower looks like a receptive female, and during a frustrating attempt at mating with the flower, the male bee will become the unwitting carrier of pollen, which it will duly deposit on its next amorous flight of fancy.

Some orchids adopt the lure technique and have long stems the tips of which bear their flowers, these can dance effectively in the breeze and look amazingly like butterflies, (Oncidium Papillio).

Many orchid flowers provide an ideal landing platform for their pollinator to use, this is usually so designed that in getting to the nectar the insect has to come into contact with the pollinia of the orchid, and this will detach itself and stick like superglue to the back of the unwitting messenger, only to be brushed against the reproductive organs of its next port of call, in some instances, the orchid aids the certainty of securing the pollinia by having a hinge and tilt mechanism to its lip, this ensures that the insect is slapped hard against the pollinia as it leans forward into the flower.

Now we come to stealth, in this case the slipper orchid lures the insect with a promise of a drink from its pouch, or attracts it by scent or sight to the edge of the pouch which is very slippery and polished, before it knows it the hapless pollinator finds itself stuck at the bottom, and is either too wet to fly, or the shape of the pouch precludes it, and there is only one way out which the insect will eventually find; as it does escape it will have to crawl through a small doorway which is so tight that the pollinator is once again pressed firmly against the pollinia as it escapes, only to repeat the exercise once more at another flower, this time depositing the pollinia as it collects a fresh one, without even knowing.

Some orchids rely on crawling insects to pollinate them, and will produce long petals which trail downwards until they touch the ground or another object, thus creating a pathway to their flowers.

Orchids really specialize in their choice of a pollinator, this ensures the continued purity of the species as the pollinator can only successfully gain sustenance from its chosen specie host, take for example the orchid Angreacum Sesquipidales. Darwin wrote about this one in his origin of the species, it produces beautiful waxy white star like flowers, which exude a heavy perfume at night, the back of the flower has a long spur, sometimes up to 12 inches or so in length, and at the bottom of this spur can be found a tiny source of nectar. Darwin reasoned that as the orchid was white, and only fragrant at night then the pollinator must be a moth, and that to be able to feed from the orchid the moth must have a tongue at least 18 inches long.

It was not until after Darwin’s death that the Predicta Moth was discovered, which possesses such a long tongue, unfortunately the great man never had the pleasure of seeing his theory proven.

Of course, orchids do not rely on insects alone, humming birds, small mammals, even bats, and not least of importance the wind, all contribute to their reproductive successes.

Orchids produce masses of tiny seeds, one single pod could contain as many as 4million seeds, it would seem obvious that with such a large harvest, the plants reproduction is assured, but remarkably orchids do have a major setback when compared to other forms of plant life; because the seed is so small, it does not possess the natural reservoir of food with which most seeds are endowed, and does not possess the ability to convert food sources into the useful sugars etc. which it needs, therefore an amazing symbiotic relationship forms between the seedling and certain fungi....... the seed must become infected early in its life cycle if it is to develop into a mature plant, and the miccorhizial filaments of the fungus become its lifeline to the outside world.

The earliest written evidence of their presence if in the form of Chinese and Japanese drawing and literature of the circa 700 B.C. At that time described and used as herbs and cures for many maladies.

You may be interested to know that the seed pod of the orchid Vanilla planifolia is used to flavour ice cream.

World-wide over 40,000 species are known, in addition there are in the order of 350,000 plus hybrids registered, these records are kept at Kew here in the U.K.

In England orchid cultivation commenced some 250-300 years ago as church missionaries, army personnel and explorers sent plants to friends and patrons. The nurseries of that era dispatched 'plant hunters' far and wide. Seafarers also returned with exotic plants to supplement their income, and it was only natural, (one of the major ports of the time being Liverpool) that the North of England became a focal point for orchid culture.

A few northern names which may strike a chord with anyone familiar with orchid history are, Thomas Moss (Cattleya mossiae), a Liverpool Banker; Holbrook Gaskell (Cattleya gaskelliana) a Liverpool chemical manufacturer; Enoch Harvey (Dendrobium harveyanum) a Liverpool solicitor. The Rev John Clowes (Anguloa clowesii) resided in Manchester, and not too far away in Staffordshire lived James Bateman (Vanda batemanii). Whilst in Derbyshire one of the largest collections of orchids at that time was at Chatsworth, the seat of the Duke of Devonshire.

Only the then wealthy could afford the upkeep of 'stove houses' in which to bring back such plants to growing and flowering condition in addition to paying the high price orchids would command at auctions etc.,

Today a mature plant in flower or near flowering can be purchased from one of the orchid nurseries who regularly attend our shows for the same cost of the average florist's bouquet, which usually fades after a few days, whereas, orchid flowers will last from three to twelve weeks - some even longer.

Many orchid plants may be kept within the average centrally heated home to grow happily and continue to give pleasure with subsequent flowerings.

Known affectionately as 'The Royal Family of Plants' orchids grown in a sizeable collection will challenge the experienced horticulturist, the humble gardener and the house plant enthusiast as no other growing experience will; yet there is no mystique since most orchids can now be cultivated successfully.

The Author of this site and his wife are both active members of the Society, and have a mixed collection of orchids growing happily in their greenhouse, and on the kitchen windowsill.

It is no longer necessary to have large greenhouses and even larger pockets to be successful at growing quality plants.

Providing that the basic rules of plant culture are followed, anyone who has the desire can be rewarded by their efforts.

There are approx. 35 wild species in the British Isles - most of which do not survive being moved from their natural habitat, however nurseries specializing in "hardy orchids" can provide similar plants for outdoor growing.

Orchids were on this Planet long before man arrived, and despite our efforts to cut back forests, pollute the air and generally interfere with the ecology of the world as only we can it is probable that they will be there long after we have gone.